My favorite foods are those that have character, history, and culture. They are also the ones that bring me the most pleasure to make. It is almost like taking a mental a spiritual vacation for a moment. I find it quite therapeutic to work with ingredients that speak about a people, lifestyle, and tradition. My stuffed honey figs are one of those special foods. Inspired by the Greek, “sika fournóu me méli,” or baked stuffed honey figs, I found the ingredients to overlap greatly with those used in the Levantine region, particularly in Palestine. Indeed, many similarities can be found between Eastern Mediterranean cultures, and not only in cuisine, but also in culture and tradition. Figs, pistachios, honey, and sesame seeds are culinary staples when it comes to desserts in the region.

Furthermore, I altered the traditional way of making these stuffed honey figs to add some Arabian touches including cinnamon, orange blossom water, grated coconut, and sultanas. The filling I used is similar to that used in baklava. These delectable stuffed figs simmered in a delicious concoction made of honey, freshly squeezed orange juice, and cinnamon are absolutely exquisite, nutritious, and simply delightful to the taste. 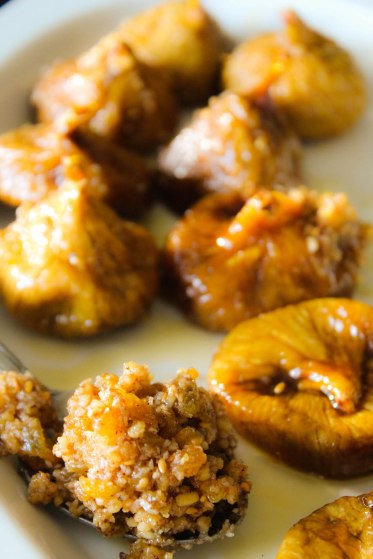 1. In a pot over medium heat, simmer the orange juice, orange zest, cinnamon sticks,  and 2 tablespoons of honey for 5 minutes or until the sugar is fully dissolved. Add the dried figs to the pot and simmer covered over low heat for an additional 10 minutes. This should bring the figs back to life and they should become relatively plump. After they have cooked, remove from the heat and leave the figs to cool in the orange and honey syrup.

2. Prepare your filling. With a mortar and pestle, or a food processor, finely crush the walnuts together with the coconut flakes to create a dry paste. In a bowl, combine the walnut and coconut paste with the cinnamon, 1 tablespoon honey, sesame seeds, sultanas/yellow raisins, and orange blossom water. Stir all of the ingredients together until fully incorporated.

3. Remove the honey coated figs from the pot and reserve the syrup inside the pot as the figs will be simmered again after filled. Cut a slit of about  1 centimeter-thick on the top side of each fig. Stuff the figs with the filling until full, but not overstuffed. You should be able to close the slit after adding the filling.

4. Once all of the figs have been stuffed and moderately sealed, return to the pot to simmer covered over medium heat for an additional 5 minutes.

5. Leave to cool for about 15 minutes and eat warm or reserve for later. The figs will be great for up to a week, although they never seem to last that long in my kitchen. 🙂